Yes, I know. It’s another Jane Austen post. I will not apologize! The Jane Austen Society is such a lovely book. Whether you’re a huge Jane Austen fan like me or have only read one book or only seen a movie or two, this book is so worth the read. It’s got romance, trauma, strong friendship, and so much more.

As you scroll through this post, make sure to check out the synopsis, my review, and don’t forget to look at the other amazing blogs on this tour!

The Jane Austen Society: A Novel by Natalie Jenner

Just after the Second World War, in the small English village of Chawton, an unusual but like-minded group of people band together to attempt something remarkable.

One hundred and fifty years ago, Chawton was the final home of Jane Austen, one of England’s finest novelists. Now it’s home to a few distant relatives and their diminishing estate. With the last bit of Austen’s legacy threatened, a group of disparate individuals come together to preserve both Jane Austen’s home and her legacy. These people—a laborer, a young widow, the local doctor, and a movie star, among others—could not be more different and yet they are united in their love for the works and words of Austen. As each of them endures their own quiet struggle with loss and trauma, some from the recent war, others from more distant tragedies, they rally together to create the Jane Austen Society.

The full unabridged text of THE JANE AUSTEN SOCIETY was read by the distinguished English film, television, theatre and voice actor Richard Armitage for the audiobook recording. Best known by many period drama fans for his outstanding performance as John Thornton in the BBC television adaptation of North and South (2004), Armitage also portrayed Thorin Oakenshield in Peter Jackson’s film trilogy adaptation of The Hobbit (2012 – 2014).

“Just like a story written by Austen herself, Jenner’s first novel is brimming with charming moments, endearing characters, and nuanced relationships…Readers won’t need previous knowledge of Austen and her novels to enjoy this tale’s slow revealing of secrets that build to a satisfying and dramatic ending.” ―Booklist (starred review)

“Few things draw disparate people together so quickly as discovering they love the same writers. Few writers cement such friendships as deeply as Austen does. I believe that the readers of Jenner’s book will fall in love with the readers inside Jenner’s book, all of us thinking and dreaming of Austen the whole while. What could be better? Nothing, that’s what! A wonderful book, a wonderful read.” ―Karen Joy Fowler, New York Times bestselling author of The Jane Austen Book Club

“Fans of The Chilbury Ladies’ Choir and The Guernsey Literary and Potato Peel Pie Society will adore The Jane Austen Society… A charming and memorable debut, which reminds us of the universal language of literature and the power of books to unite and heal.” —Pam Jenoff, New York Times bestselling author of The Lost Girls of Paris

I don’t even know where to begin. I’m not sure I’ve ever wanted to transport myself into a book as much as I wanted to be in the world of The Jane Austen Society. A little village in England with a group of people who love Jane Austen as much as I do? Yes, please. But that wasn’t the only thing that made it so easy to escape into this book. It was the characters that really made this book so wonderful.

There are seven characters who are the main focus of the book: Francis, Dr. Grey, Adeline, Andrew, Evie, Adam, and Mimi.

Francis lives in the Great House, the home where Jane Austen lived for a few years during her life. At the beginning of the story, Francis hasn’t left the house in a long time and she is weighed down by her sickly father and the way her life has turned out.

Dr. Grey is the local doctor in the village. Life hasn’t been the same for him since his wife, Jennie, died, but through reading Jane Austen and spending time with a certain teacher in the village, he’s been able to at least get by.

Adeline starts off the book as a energetic teacher willing to push the boundaries of the villagers to ensure her students get a unique education. But tragedy soon hits her twice and takes everything that made life worth living for her. It’s only Jane Austen and the society (and the people in it) that turn her world around.

Andrew is a solicitor who has known Dr. Grey and Francis since childhood and used to be in a relationship with Francis. Now, he’s her father’s lawyer, but still pining for what was taken away from him so long ago. Maybe the society can give him a second chance at love?

Evie is probably by favorite character. She’s unable to finish school with her favorite teacher Miss Adeline Lewis, but when she goes to work as a maid in the Great House for Miss Francis, she makes the most of it. She catalogs the whole library because she wants to! I freaking love her!

Adam is where the story begins. His life has been a series of tragedies. His father and his two brothers are dead and he now lives with his mother who is not the greatest person to be around most of the time. But when he meets a tourist looking for Jane Austen’s house, something sparks in him that leads him to a life he could’ve never expected.

Mimi is a big Hollywood actress who just so happens to be obsessed with Jane Austen. When her fiance decides to buy her a house Jane Austen used to live in, she comes to a small village and meets a group of people that will change her glamorous life forever.

Whether it’s fate, their love for Jane Austen, or something else, all these people come together to start The Jane Austen Society. Their mission is to create a place where they can open a museum dedicated to the famous author and to further the study of her life and books.

Maybe I just haven’t read enough (lol my friends would beg to differ), but I haven’t seen an adult book with a found family in it  like this one. And that made this so goddamn refreshing. Making friends as adults (when you’re not in school) is not easy and to see these people come together due to their love of Jane Austen and because they clearly see the same level of trauma in each other’s eyes…it makes me weepy just thinking about it.

That line from Pride and Prejudice: “I was in the middle before I knew that I had begun,” rings very true to how I ended up feeling about this story and most of the characters in it (except for Jack Leonard. He can eat shit). I was listening to the audiobook and before I knew it, I was freaking crying at the end because it was over and I couldn’t spend more time with them.

Ok, before this turns into me writing poetry about the characters (I would!), let’s talk about the audiobook since that’s how I experienced the story. When I signed up for this tour, I mentioned that I would kill for the audiobook because the voice of Richard Armitage is a gift from the gods. I did not expect to actually get a copy of it! The day I received the email…there might have been some flailing.

But here we are, and let me tell y’all…YOU NEED TO LISTEN TO THE AUDIOBOOK! Even if you read the book too, you need to buy or borrow the audiobook. It does not disappoint. He does the voices of all the characters and I think it allowed me to immerse myself into this world even more (listen to the excerpt earlier in this post!).

Trigger warnings: miscarriage, past death of family members, sexual assault (on the page)

In terms of the overall story, the characters could not have been better developed and the way the storylines were all weaved together was masterfully done. Some of the storylines also mimicked Austen’s novels which I loved more than life.

I’m giving The Jane Austen Society 4.5 out of 5 stars.

You can get The Jane Austen Society by Natalie Jenner now! 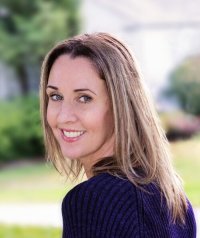 Natalie Jenner is the debut author of THE JANE AUSTEN SOCIETY, a fictional telling of the start of the society in the 1940s in the village of Chawton, where Austen wrote or revised her major works. Born in England and raised in Canada, Natalie graduated from the University of Toronto with degrees in English Literature and Law and has worked for decades in the legal industry. She recently founded the independent bookstore Archetype Books in Oakville, Ontario, where she lives with her family and two rescue dogs.

May 26 A Bookish Affair

May 26 Margie’s Must Reads

May 26 The Reading Frenzy

May 27 Book Confessions of an Ex-Ballerina

May 28 Getting Your Read On

May 28 The Lit Bitch

May 30 Cup of Tea with that Book, Please

May 31 Jane Austen in Vermont

June 01 From Pemberley to Milton

June 03 The Interests of a Jane Austen Girl

June 06 From the TBR Pile

June 07 An Historian About Town

June 10 Lady with a Quill

June 12 A Bookish Way of Life

June 15 Confessions of a Book Addict

June 22 Reading the Past

June 22 Babblings of a Bookworm

June 23 My Vices and Weaknesses

June 28 Probably at the Library