Omg, bookworms!! Get ready for me to flail. Nellie Bly is one of my ultimate role models and the fact that authors are writing about her and her life makes me so happy I could scream. When I saw the blog tour for The Girl Puzzle was coming up, I knew I had to be a part of it.

Today, I have an interview with the author, Kate Braithwaite and….A GIVEAWAY!! You can win a signed copy of The Girl Puzzle! 15/10 recommend you enter. Alright, before I faint from my excitement, let’s get to the book and the interview! 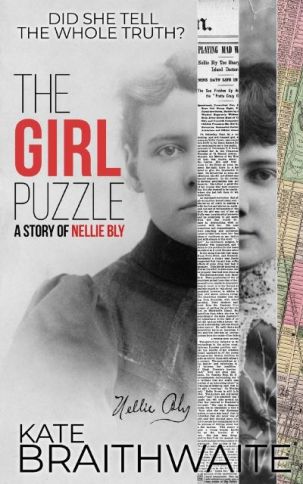 THE GIRL PUZZLE
BY KATE BRAITHWAITE

Her published story is well known. But did she tell the whole truth about her ten days in the madhouse?

Down to her last dime and offered the chance of a job of a lifetime at The New York World, twenty-three-year old Elizabeth Cochrane agrees to get herself admitted to Blackwell’s Island Lunatic Asylum and report on conditions from the inside. But what happened to her poor friend, Tilly Mayard? Was there more to her high praise of Dr Frank Ingram than everyone knew?

Thirty years later, Elizabeth, known as Nellie Bly, is no longer a celebrated trailblazer and the toast of Newspaper Row. Instead, she lives in a suite in the Hotel McAlpin, writes a column for The New York Journal and runs an informal adoption agency for the city’s orphans.

Beatrice Alexander is her secretary, fascinated by Miss Bly and her causes and crusades. Asked to type up a manuscript revisiting her employer’s experiences in the asylum in 1887, Beatrice believes she’s been given the key to understanding one of the most innovative and daring figures of the age.

“Novelist Braithwaite (The Road to Newgate, 2018, etc.) delivers a well-researched and engrossing tale that focuses on female empowerment. A story of grit and perseverance that will appeal to readers interested in the history of women in journalism.” – Kirkus Reviews

BR: What first made you want to become a writer?

KB: Reading books. I’ve always loved novels and wanted to ‘make my own’ for as long as I can remember. It took me a long time to work out what I wanted to write about, though, and I had a lot of self-doubt and false starts.

BR: Is there some part of your writing process you think is unique to you?

KB: Yes and no! I don’t suppose any two writers do things the same way and processes change for different books too, so in that sense it’s always unique. I have some quirks. When I’m writing a scene and I come up against a historical detail that I need (the name of the street Delmonico’s restaurant was on, what a Bellevue hospital ambulance actually looked like, for example) but I don’t want to stop the flow of writing, I’ll literally type “bla bla bla” and keep going. That works pretty well – the trick is to remember to go back and fill in the info before showing it to anyone else!

One of the nice things about writing is talking with other writers. We are all different, but there are common experiences – loving and hating editing, struggling with structure, coping with a first draft that isn’t where you want it to be. Often people talk about writers being planners or pantsers. Planners outline their story, whereas pantsers start with a character or a conflict and go where the story takes them. I thought I’d be a pantser, although never a true one, as my historical fiction has always had a strong factual basis, but The Girl Puzzle was really closely outlined so I guess I’m a planner now. I know I’m always learning the craft and trying to do better.

BR: What interested you in Nellie Bly? Why write a book about her?

KB: Nellie Bly was an extraordinary person. When I think, really think, about a twenty-three year old young woman setting off by herself on a mission to be committed to an asylum, with only the promise of two newspaper men she barely knew that they would get her out, I’m so in awe. And her asylum adventure was only the beginning. She spent several years doing uncover exposes from pretending to be a woman who wanted to sell her own child, to getting herself arrested so she could report from a police station cell. Then she travelled solo around the world, wrote a novel, ran a big business and patented the steel barrel, reported from Austria during World War I and lastly ran an opinion and advice column that doubled up as an informal adoption agency. What a character! But like many people with a great deal of success, she wasn’t always happy. Nellie Bly had troubles with close family members and with financial advisors and employees. She did marry but at one point her own husband had her followed by a private detective.

When I read Nellie’s own description of her ten days in the Blackwell’s Island Lunatic Asylum I felt there was something – or rather someone – missing. Nellie Bly. She was a reporter and so she reported what she saw in bald terms. I wanted to read about how she felt. I wanted to know how the experience affected her. After a lot of reading and research, I came up with a way to tell her story that I hoped would get to grips with the extraordinary and brave woman she was, not just in her early days in New York, but much later in life too.

BR: While doing research for The Girl Puzzle, was there anything you found out that surprised you?

KB: There were many surprises, but the most important was that she wrote three different versions of her asylum experience. First there were two lengthy articles published on two consecutive Sundays, just after her release. About two to three months later, those articles, with some notable changes and additions were published in book form, along with a couple of her subsequent articles. I had no idea when I started learning about her that there were these two versions or that I’d first read the published book story, not the original articles. One day I found myself reading the articles in a different book, expecting the story to be exactly the same and being very surprised when it wasn’t. I thought I’d gone mad! And then lastly, a few years later, she wrote Among the Mad for Godey’s Lady’s Book… and it is different again. Add to that, I found that other newspapers investigated her time in asylum and interviewed staff about her. There was another side to the story too!

BR: What was your favorite part of this book to write?

KB: There are several bits I really loved doing. There’s a scene in the night-time in the asylum when someone is creeping around her room – that was a lot of fun to do. There’s a scene near the beginning where she is followed down a dark street at night. I love that scene because it’s a near universal experience for all women, unfortunately. Putting her in that situation made her very real for me. I’m pretty attached to her last scene in the book with Frank Ingram – she gets cross and I like that strong feeling. And then in the sections of the book when Nellie is older, I love when she teases her secretaries and argues with Ernest Coulter. She was a person who liked to get her own way and had a great deal of self-belief. I’ve tried to show that in those scenes.

BR: What draws you to write historical fiction?

KB: It’s my favorite genre to read so I guess it makes sense for me to write it! Also I’m a lover of history and the way the past resonates with the present. I really like it when I come across something from the past that I can connect to modern life – whether that’s a person or an event or a feeling. As a writer, history gives me a framework to get me started. The research can feel like detective work and I love that. I enjoy working out what made someone tick. I like filling the gaps with fiction that works with the known facts. There’s also a lot of geeky pleasure in the research process. For example, in her story Nellie writes about how she chose a boarding house to go to and feign madness in order to be sent to the Island. In her words: “From a directory I selected the Temporary Home for Females on 84 Second Avenue.” With a bit of googling, I was able to find Trow’s New York City Directory 1887/8 and right at the end there is a list of boarding houses including the one she chose. In the novel, I have Nellie looking through the list of possibilities, considering some and discarding others – all the ones I mention are real ones, taken from the source she most likely used.

BR: What are you working on next?

KB: I’m doing the groundwork for what will hopefully be a series of novels set during the French Revolution. Half of me is wondering what I’m doing! My first two books were set in the 17th Century – one in Paris, one in London – and then I jumped period and continent to do Nellie Bly. In some ways it makes no sense at all to shift to the 18th Century and back to Europe, but its one of those things where the idea has me really gripped and so that’s what’s happening. I have a niggling worry about hopping around within the genre too much, but I’m going to go with my gut, and believe that my passion for the story I’ve got in mind will be worth all the extra research and so on.

BR: What are currently reading? Or what’s on your list to read next?

KB: I’ve just finished The 7 ½ Deaths of Evelyn Hardcastle by Stuart Turton, which is a crazy mix of surreal time-travel and an Agatha Christie murder mystery. I had no idea what was going on most of the time, but I didn’t care. It was amazing. And I’m about to start The Lost History of Dreams by Kris Walherr. I really love the moment between books when I can think on the story I’ve just enjoyed and look forward to the next story I’m about to inhabit! I think Stephen King called novels “portable magic”. That’s exactly how I feel about books.

Kate Braithwaite grew up in Edinburgh but now lives with her family in the Brandywine Valley in Pennsylvania. Her daughter doesn’t think Kate should describe herself as a history nerd, but that’s exactly what she is. Always on the hunt for lesser known stories from the past, Kate’s books have strong female characters, rich settings and dark secrets.

The Girl Puzzle is her third novel.

During the Blog Tour, we will be giving away a signed copy of The Girl Puzzle by Kate Braithwaite!

– Giveaway ends at 11:59 pm EST on May 17th. You must be 18 or older to enter.
– Giveaway is open INTERNATIONALLY.
– Only one entry per household.
– All giveaway entrants agree to be honest and not cheat the systems; any suspicion of fraud is decided upon by blog/site owner and the sponsor, and entrants may be disqualified at our discretion.
– The winner has 48 hours to claim prize or new winner is chosen.

Sunday, May 5
Review at Passages to the Past

Monday, May 6
Interview at Jorie Loves A Story
Guest Post at Passages to the Past

Wednesday, May 8
Feature at What Is That Book About

Friday, May 10
Review at Macsbooks

Monday, May 13
Interview at Bookish Rantings

Friday, May 17
Review at A Book Geek
Review at Coffee and Ink